Latvia, which is one of the most important favorites of foreign investors, stands out with its amount of investment increasing day by day. Considering the latest data announced at the end of 2019, it is seen that the amount of foreign investment has exceeded 7 billion Euros. A total of 13,300 new businesses were established in Latvia in the previous year and a significant portion of them started operations in the capital Riga. The Baltic countries offer different opportunities for investors and are therefore more preferred recently.

It can be said that Estonians generally have a special interest in Latvia for investment. The number of investments made by Estonia of 10 million Euros and above was five last year. However, Lithuanians did not have a single investment of this size in the same period.

It was Germans who made the most important development in foreign investments coming to Latvia last year. The investment amount of Germans was 365.3 million Euros in this period. Around 288 million euros of this amount belong to the German building materials manufacturer Schwenk[1].

The majority of the investments made by Schwenk Company are in the form of a cement production facility, two cement raw material mines, an aggregate quarry, six rapid mixing plants, etc. As can be understood from here, the company has made a serious investment in Latvia by purchasing a ready and working factory. Besides, 38% of the acquired company’s share in a different cement factory in Lithuania is among those purchased.

The cement company, which is the main reason for the rapid rise of the Germans, caused a decrease in the investments of the Spanish. Because it is known that the former owner of the cement factory was Spanish or the investment had come from Spain.

You May Also Like:Foreign Investments in Latvia Continue to Increase Rapidly

Major Parts of Investments are made in Riga 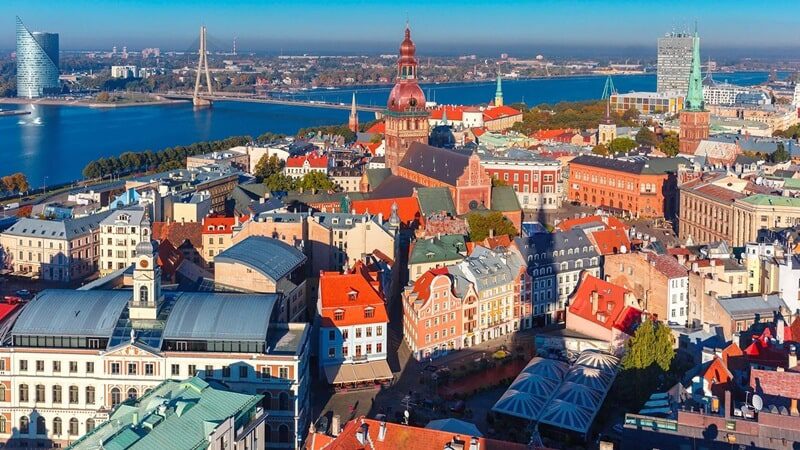 You May Also Like:Why is Latvia the Most Favorite Country for Investment?

The Interest in Property Companies are Increasing

It is a fact that foreign companies coming to Latvia show more interest in some sectors. There may be shifts between sectors according to the general conjuncture in the world. The fastest increase last year was in health and social care services. The volume of foreign investment in these sectors increased by about 28% and the investment amount increased by 2.4 million Euros, reaching the 10 million Euro threshold (9.96 million). On the other hand, it should not be forgotten that there has been a slight decrease in sectors such as transportation and storage.

Fill in the Form Below to Get Answers to All Your Questions About Investing in Latvia! (FREE)